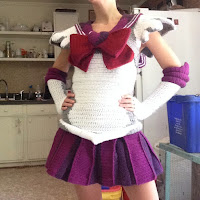 I was moving full-steam ahead on this mighty adventure. 'Was' is the operative word. I had some grand goals to finish completely by the end of this weekend. But alas!

I thought I had another skein of Caron Simply Soft 'Passion.' I was trucking along on the boots when I ran out and discovered that I had no more. 'Passion' is the main purple I'm using. I don't even need that much more to finish. I left the house to get another skein and both Walmart and Michael's failed me. They always have this color, but not when I need it. I'm not going to order a single skein of yarn, so...I guess I'll be finishing the yarnwork for the Silence Glaive.

Not having made a great deal of gloves in my crocheting time, I poked around the Internet until I found a pattern I could modify in order to work for this costume. I went with Stitch11's Simple, Easy and Quick Arm Warmers. 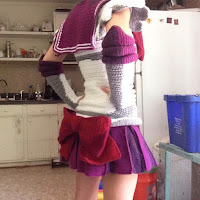 I dropped my hook size down to an H and I replaced all of the DCs in the pattern with HDC because of my diminutive size. HDC will also keep the mitts more breathable. I also didn't work in continuous rounds because I needed to do the colorwork. I made the piping at the elbow with my trusty size F in SC and then stuffed it with polyfil. I'm immensely pleased with the piping, especially the pointy bit, which I've seen overlooked in some other cosplays. I need to go back in and do some stitching with a yarn needle to add some detailing on the wrist and hands.

I decided early on that I wanted to go fingerless. Tactile function is very important to me and year after year I seem to go to Dragon*Con and dress as characters that wear gloves. Not this year, friends! 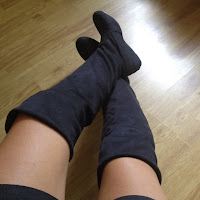 Saturn's boots have heels. My boots do not. This was not a design choice like the fingerless mitts. I have a busted ankle and can't wear heels. Her boots also stop just below the knee and mine stop just over the knee. These boots are being recycled - they're my Miranda Lawson boots from years ago.

The boots are made of these different sections and I decided to crochet shapes the same as the sections then seam them together, making what is basically a cover. I was asked on Facebook if the cover is also going to go over the sole. Excellent question! No, I'm going to be putting a line of fabric glue along the bottom edge of the boot, just above the sole. The covers I'm making are also tight. The glue will just be there to keep everything in place.

Tragically, boots are now on hold because there is no 'Passion.' I'm really excited about doing the laces, which will be non-function, but they're going to look super cool. I think... 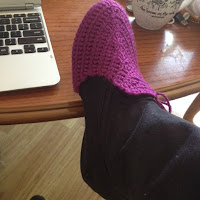 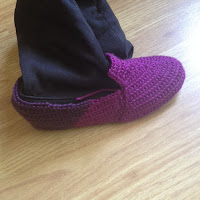 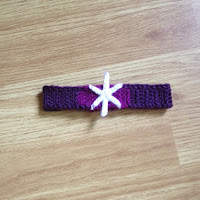 I finished the choker. It took like 2 minutes. I forgot to put it on in the pictures above though. I've also worked a good bit on the Silence Glaive, but it isn't quite done. I need to touch up the details below the blade and cover the bottom. I took some artistic liberties with the embellishments at the top. There's a lot going on there. 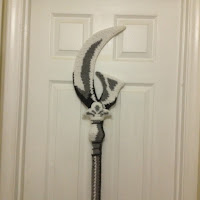 There was a fatal flaw in the construction of the frame under the yarn that I haven't been able to remedy yet. I didn't take into account that yarn is extremely heavy and I failed to properly reinforce the blade. This has resulted in the blade flopping over, all flaccid, unless the glaive is propped against something. I have an idea that's either completely genius or completely idiotic. Only time will tell and until then I'm going to keep it a secret.

I'm going to finish up everything I can do without my 'Passion' yarn and then I'm going to make some more headway with my Nisha cosplay until the yarn materializes or I can justify ordering it. I also need to get to work stocking up the shop for fall soon!